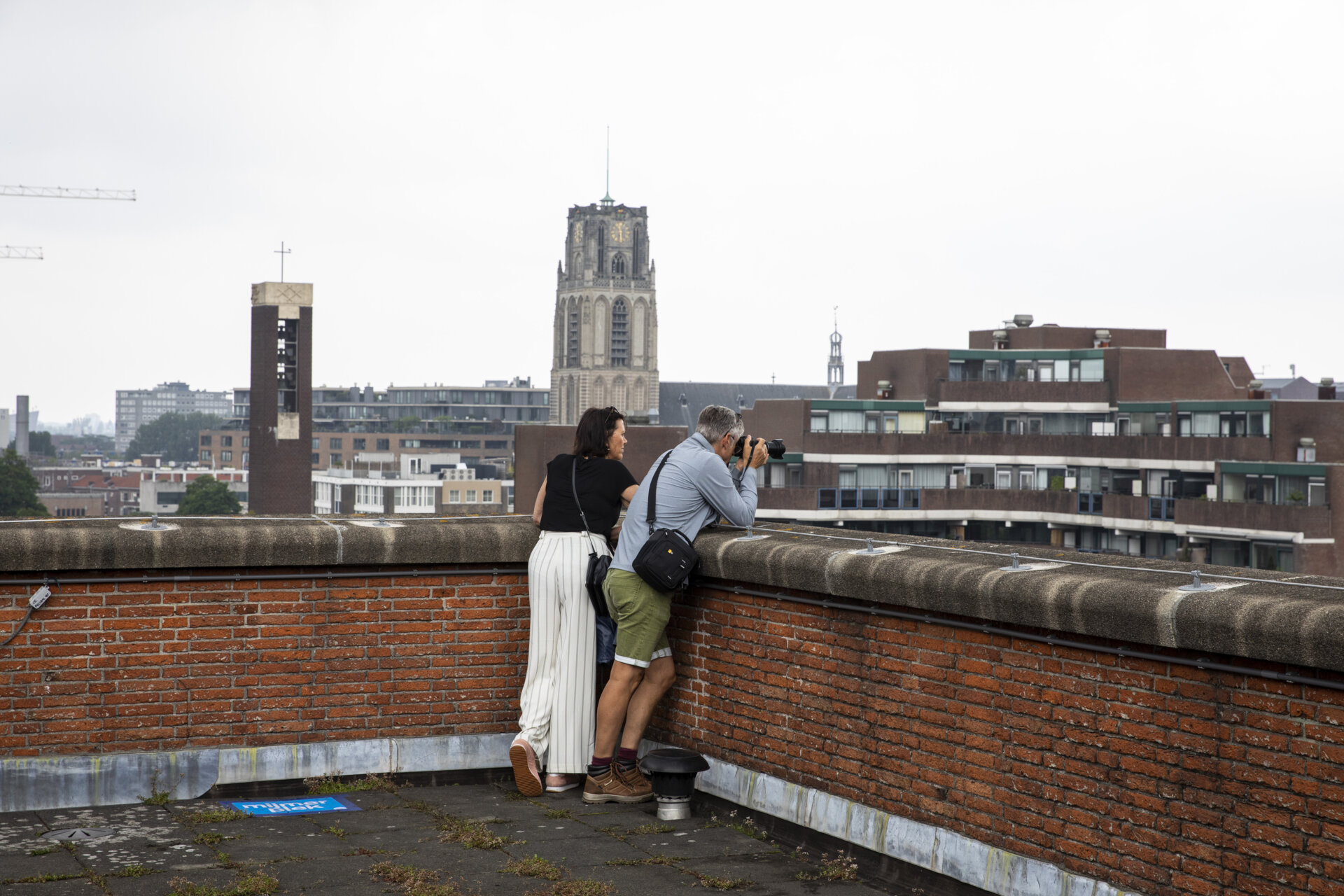 This varied rooftop route takes you past old monuments and post-war architecture from the 50s. The former HBS on ‘s Gravendijkwal is now an incubator for creative entrepreneurs. Let yourself be surprised by the tenants’ art. Discover the Scheepvaartkwartier from the Kamer van Koophandel and admire Central Station from above.

HBS ‘s Gravendijkwal is a monumental school building from the early twentieth century. The building is now managed by SKAR, an organisation that manages creative incubators throughout Rotterdam. In consultation with the municipality, SKAR, Dansateliers and GROUNDS developed a plan to turn the former school into a new incubator for the performing arts. On your way to the roof, on which you will enjoy the view over the New West district, you will be surprised by musicians from New Grounds, the venue for new talent that is now located there.

Check out the programme of New Grounds

Programme June 4:
Omar Ka & Friends ft. Bao Sissoko
Omar Ka, a friend of New Grounds, will invite his band and multiple friends to do an amazing jam session. Born in Senegal, he came to Rotterdam in 1994. He is a descendent of a century-old West-African nomad culture (Fulani) with a very rich music culture. He has made national and international success and has played with many known artists; such as Trijntje Oosterhuis and DJ Tiësto. For the Rotterdamse Dakendagen he will mix it up, and make it a lively jam session! Think of a mix between Surinamese, African and Dutch music. Also, a special guest will be joining all the way from Brussels, the Sengalese kora legend, Bao Sissoko.

Programme June 5:
New Grounds team
For the 5th of June New Grounds presents a very personal performance of members of their team. All of these musicians are staff members, either floor managers, bartenders or ticket scanners. Find out about the staff members and their unique and amazing music below.

Alisa Victoria sings her pop songs, supported by her pianist Esther Jacobs. In her work, the influence of many Dutch and English songwriters can be heard. Alisa Victoria uses her music to communicate her feelings and hopes to take the listener along with her story through that.

The music of Anoush Saadat has its roots in the flamenco culture as he has been studying and working as a flamenco guitarist since 2010 in Spain, Germany and China. He has been described as an extremely lyrical player by most who hear him, an attribute which has made him very desired by both flamenco singers and dancers. Ever since he moved to the Netherlands in 2017 he has also been working on his repertoire as a soloist and as an arranger of his compositions for his flamenco cross-over band ‘Karisma’.

Benjamin Solomon graduated from the conservatory of Rotterdam in 2021. In the past, he led an innovative cross-media jazz trio with the main focus of performing live on stage as a means to play a video game. More recently, he has been fine-tuning the craft of playing traditional jazz composition in the form of solo bass performance and playing with a few Rotterdam-based ensembles such as the Youngmin Kwon Quintet and the Federico Carreras Quartet.

Enda Joyce is Jazz Pianist, composer and bandleader from Donegal, Ireland. He is currently studying for a Masters in Music at Codarts Rotterdam. For this solo piano concert, Enda will be performing a mix of Brazilian Jobim repertoire and original funk compositions.  Expect energetic grooves and improvisation.

Martijn van Ditshuizen is a 20 year old saxophonist based in Rotterdam. You can find hm mostly in jazz and hip-hop settings these days. Next to that, he is experimenting with loop- and effect pedals to create a solo set in which he tries to combine as many of his musical backgrounds into a style he likes to call electronic jazz.

Omar Ka, was born in Senegal, he came to Rotterdam in 1994. He is a descendent of a century-old West-African nomad culture (Fulani) with a very rich music culture. He has made national and international success and has played with many known artists; such as Trijntje Oosterhuis and DJ Tiësto.